Saratoga Living’s Editor in Chief Richard Pérez-Feria outlined goals such as informing the local press and public, grasping the attention of national press and tabloids, and coordinating the efforts pre, during, and post event.

The execution of this campaign began well in advance. Baker Public Relations began our efforts by contacting influencers who would attend and distribute content related to the event. We secured a number of these social media personalities.

Baker PR then pitched local media personalities known for entertainment news and lifestyle pieces (i.e. Kristi Gustafson Barlette from Times Union and Taylor Rao from Two Buttons Deep). By doing this, we secured Two Buttons Deep to preview the event by writing article and producing video. They also were secured for attending the brunch, interviewing her and publishing a final “Ten Questions Deep with Dorinda Medley.” Gustafson Barlette published two pieces in the Times Union; “20 Things You Don’t Know About Me: RHONY’s Dorinda Medley” and “Giveaway: Tickets to Saratoga Living’s launch party with RHONY’s Dorinda Medley.” Baker PR coordinated the collaboration for the giveaway.

With weeks until the event still to go, the team drafted a national tabloid list specific for the Saratoga Living event. Baker PR sent strategized pitches to each media contact. By doing this, the team landed an exclusive article with The Daily Mail, giving the outlet a first-look of the cover with Dorinda Medley and the quotes within her interview. Baker PR then secured national coverage by E!News, People Magazine, US Weekly, amongst others.

In addition, national entertainment blog posts were published such as Reality Blurb! and The Real Housewives Gossip.

After national attention and exclusive coverage, Baker PR drafted a press release on the event, which was distributed to regional media (i.e. tv stations, radio stations, print media). Baker produced b-roll for anchor previews and sent the link along with the press release. By doing this, we landed content on local news channels a day prior to the event.

A media advisory was also drafted and distributed preceding the event to all press. This was followed up with phone calls to designated media.

The morning of the event, Baker PR got Saratoga Living’s Editor in Chief to appear on CBS6 for a live interview. Coverage continued at the event where News10, CBS6, The Saratogian, and Two Buttons Deep conducted interviews and published content. Baker PR’s InfluenceHER series also conducted a “Baker’s Dozen” video shoot with Dorinda Medley.

The day concluded with Saratoga Springs Commissioner of Finance Michele Madigan proclaiming October 10 as “Dorinda Day,” which was the headline of The Saratogian the day following.

Overall, the media outreach strategy was successful with over 19 pieces of coverage with over 3.9 million online readers. Content was shared about 500 times digitally. This allotted a large crowd at the event with much excitement. 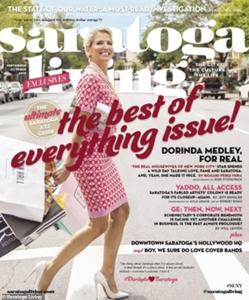