ALBANY, N.Y. – Mohawk Ambulance Service has updated its neonatal intensive care unit (NICU) ambulance which is operated in conjunction with staff from Albany Medical Center. With a coverage range of 25 counties in New York and western Massachusetts, the ambulance responded to its first call on April 6, 2016 and has since responded to more than 100 calls involving child and infant patients. “Ambulance 33” is the fifth ambulance purchased as part of a long-running collaborative project between Mohawk Ambulance Service and the Bernard & Millie Duker Children’s Hospital at Albany Medical Center.

The ambulance is equipped with a diesel engine and spacious interiors, which allows Albany Medical Center staff to more easily maneuver when treating patients. A Stealth Power smart-electric power system provides power to Albany Medical Center’s intricate on-board life support apparatuses, two medical grade air compressors to power breathing ventilators, and oxygen capacity to provide high-flow oxygen to a patient for nearly 24 hours. This system allows crews to turn off their engine while maintaining access to the power supply for up to six hours, in turn, reducing emissions. 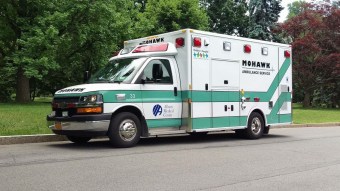 sophisticated emergency care to our youngest patients when minutes matter most,” said David Clark, M.D., director of the Bernard & Millie Duker Children’s Hospital at Albany Medical Center. “With the latest electrical, medical and mechanical equipment, Mohawk Ambulance underscores its commitment to safely transporting the critically ill and injured babies and children of our region.”

“The technology and equipment used to save lives changes frequently and we must constantly invest in our company’s fleet and the equipment our professionals use to provide the highest quality of emergency medical care to the patients we serve,” said James P. McPartlon, III, president, Mohawk Ambulance Service. “We are committed to saving lives and we will dedicate the resources necessary to provide the best care and treatment to those who need and utilize our services.”

Other features of the ambulance include a slide-out electric-hydraulic lift to assist in loading and unloading, an air-ride suspension system to provide a gentler ride and chains that can be added to the tires with the flip of a switch in the event of inclement weather.